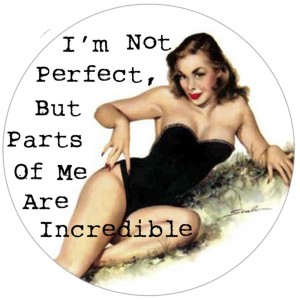 If you have ovaries, then you know the title line.  If you were dating or married to a woman in 2001, then you were likely forced to sit through the movie, Bridget Jones’ Diary. This movie frequently resides in the single girl’s collection of emergency movies in the event she’s ever let a man throw her off-balance or has gone through any type of break up. As a matter of fact, Ben and Jerry’s needs to just sell pints of Chunky Monkey with every purchase of the movie.

Bridget, the perfectly flawed single girl who feels as though she constantly walks about as some sort of mistake to society, is told at one point in the movie by the dashing Mark Darcy, that he likes her very much.  Just as she is.

I love this scene. I’m a chick. Of course I do. One thing I love so much about this scene is that as he leads up to his big “just as you are line” he mentions a few other things first like his “There are elements of the ridiculous about you.”

If I had to ever pick one line that summed me up perfectly, that would be the one. But it’s important he says it first.

A person, that I cared very deeply for once said to me that he had very high criteria. And that I didn’t meet said “criteria” for a long-term relationship. I like to look at him as my Hugh Grant. Looks great. You think it’s great. But it’s any thing but great.

And recently I’ve had a brief encounter with another gentleman. Incredibly nice and kind. But then I realized something I hadn’t noticed at first. I thought he was just someone being overly observant about everything. Then it hit me, it wasn’t just noticing things, it was sizing them up and then criticizing them. The face I was making wasn’t the one he liked, so he commented for me to change it. My response to a question wasn’t the one he wanted so he commented for me to change it. And not in a way of saying I like you as you are, it was in a way as saying, you should be someone else.

The thing I love about life and people is, we are messy. Some more than others. But women are all over the place. We gain weight. We lose weight. We grow our hair out. Then we cut it all off. We make mistakes. We get some things right. We can cry for apparently absolutely no reason. We frequently have no earthly idea what we want and other times we are so focused and driven it’s best you run and hide under the covers.

The men who finally figure out that the beauty of a woman is her being exactly as she is, in all her messy glory, is the man who finds happiness with her. Even more so, contentment.

To me, men who want to change us are only creating a reality that doesn’t really exist and they will be left with disappointment some day when the blinders are removed.

Of course I believe in growing and changing and the art of compromise. But for a man to want to change a woman at the core of who she is will never lead to anything true.

We are who we are and if most women are like me, we revel in our elements of the ridiculous. More women need to stop trying to be who they think a man wants and just be herself. Honestly, I think that’s all most men are asking for. And there is something very attractive about a woman who likes herself just as she is.

So here’s to being a perfectly flawed human being. Here’s to saying all the wrong things. To turning the soup blue. To dating all the wrong men. To believing the crap society sets before us and to just being exactly who we are.

Because I like you very much. Just. As. You. Are.

Life Lessons from a Stray Cat

Don’t you dare close your eyes.

This site uses Akismet to reduce spam. Learn how your comment data is processed.