The Sphinx has a Tail 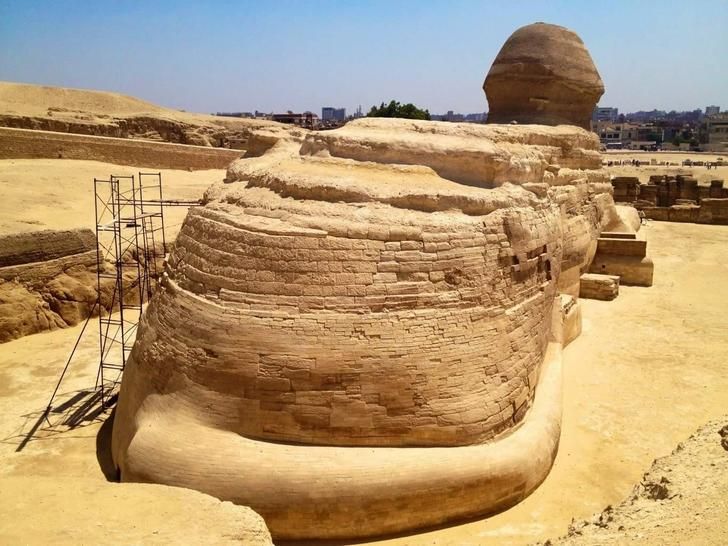 Thoughts on the power of changing perspective.

One of the many times that I drift down the rabbit hole of social media—when I should be writing, mind you—I click on one of “those” articles. You know the ones. They aren’t posted by one of your friends, just some trickery to make it look like one of your friends shared it when in fact, it is a paid promotion for an article that will go on to suck the next 20 minutes out of your life.

They have titles like Photos of Cats from the Nineteenth Century! Or maybe even “Hilarious Notes Coworkers Have Left for One Another.”

And for some stupid reason, I believe at that moment that my life couldn’t possibly continue until I see what these mysterious yet hilarious notes are. Or that no writing or work can begin for my productive day until I’ve fleshed through the menagerie of sepia-colored cats in tiny top hats and monocles. And you know, if you click on one, they will send signals back to the mother ship announcing, in what I picture is with loud sirens and red flashing lights, WE’VE GOT A LIVE ONE!

They know how to get me.

I’ve learned to reject the ones where they make you click to the next screen before they dole out another little tid-bit of the story. I just google the story and more times than not, get the full thing without having to clicked forty-two thousand times while dodging fifty million pop up ads.

The other day I was targeted with one that mentioned an alternative view to different famous landmarks and moments in history. I liked it so much I even shared it! (My advance apologies to all whom clicked on it and are now on the mother ship’s list of targets.)

One of the photos was something I quite literally had no idea about. I mean, sure, who hasn’t seen the back of the Hollywood sign by this point? But I had never seen the rump of the great Sphinx before.

And he has a tail!

The Great Sphinx of Giza is the oldest known monumental sculpture in Egypt. It’s a giant limestone statue of a mythical creature situated on the west bank of the Nile river in Egypt. I explain this to you, likely at your dismay, “Uh, yeah, Donlyn. I KNOW!” only because I told my guy about my discovery and his reply was this.

“You know,” I say. “The Sphinx!” And I held my hands up on either side of my head like I was imitating his hat. “The great Sphinx! No nose?”

He says, “You can keep repeating that word as many times as you want and I still won’t know what you are talking about.”

“It’s by the great pyramids.” He didn’t say anything so I left it alone. I just kept thinking, we are the same age. Did he not watch the 1977 Bond film The Spy Who Loved Me? When James Bond had to go to an event at the Great Sphinx to find the microfilm with the submarine tracking system plans that was on the black-market in Egypt? But instead he came across a Russian spy, who is married to a Beatle in real life, and Jaws the henchman.

I couldn’t tell if I was more upset that he didn’t know who the Sphinx was or that he missed The Spy Who Loved Me.

That movie was my introduction to the Great Sphinx. And back then, before Google and Wilikipedia, there was my mom’s closet. For some reason at the bottom of my mom’s closet was this huge set of encylopedias. Back in the seventies, these sales people would just randomly show up at your house selling vacuum cleaners and encyclopedia sets. My mom bought both. I wondered if my dad knew she even had the books, hence why they were hiding in the bottom of her closet. So I look up the sphinx and discover pictures like this.

Fast forward, ahem, 45 years. (That hurt to write just a little.) And I click on the link to the stupid article and I see this photo.

What? The Sphinx has a tail? Did any of you know about this? I mean, seriously. My cat sits like this. We call it “the loaf of bread” pose. Even the raccoons admire it.

But the point is, I bet you thought we’d never get here;

We get so used to things being a certain way that we can’t imagine any other way. We get these ideas in our head that no other perspective or choice exist. We box ourselves in. Maybe to one point of view. Or seeing only one option.

I could apply this to so many areas in life.

Being in a relationship where you feel like you have no other choice. (I had a marriage like that. I thought I had made my bed and had no other option but to lie in it. That wasn’t true.)

Working somewhere that you completely hate. You meet the day with dread even though you are meditating, working on gratitude, being mindful, and it still sucks. (I had one of those too! Never imagined in a million years I’d be okay without that job. I left it almost two years ago and my life dramatically improved.)

It could even be a simple as political views, or views of people that you can’t for the life of you figure out why they believe what they do. So you close your mind and double down. What would happen if you just entertained the idea of a different perspective? (Please, don’t throw things at me.)

You can still choose to believe whatever you want but you learn you have options.

I thought that once I turned fifty and life became increasingly difficult physically, I believed that it was just time to go ahead and throw the towel over. (Whatever that means.) I thought that no matter what training I did I would still turn into a big lump on the sofa. Then I found a woman on Instagram that started weight training in her 70’s and good God almighty, she looks amazing. There go all of my excuses.

So I started weight training and I have these lines in my arms now. I didn’t even know your arms could have lines. I thought they were supposed to be one long jiggly tube.

So, my suggestion is this. (Especially when things feel a little hopeless.)

Changes, views, and beliefs beyond your wildest imagination wait for you that you never knew could exist. There’s an entire new world and a TAIL of opportunity ready to open up for you.